Three years ago when I started writing SHORTER, it was a challenge to find companies that had moved to 4-day workweeks. They were out there, but they tended not to talk about it: you really had to dig around to find them. Things have really changed in a short time. Now, when they’re about to embark on a trial, companies will issue a press release or talk about it on their podcast. In Spain, politicians have gotten a huge amount of attention for just talking about how they’re going to trial a shorter week. Microsoft Japan generated a ridiculous amount of publicity for a simple, month-long trial in 2019.

But even today, there are organizations quietly moving to a shorter workweek that don’t get as much attention as politicians who introduce long-shot legislation to adopt a shorter workweek, or just talk about moving in the direction of a 4-day week. In Iceland, public sector workers moved to a shorter workweek starting in January, and yet almost no one knows about it. Recently I’ve been interviewing the labor leaders and politicians who helped win and implement that shorter workweek (my most interesting projects are basically excuses to talk to really cool people). The British think tank Autonomy recently published a report that provides a good overview of the story. While a few legislators (mainly from the Pirate Party, which yes is a thing) introduced proposals to shorten the workweek in the 1990s, things got serious in 2014, when politicians and unions leaders in Reykjavik (or “the city” as my subjects call it, in much the same way that New Yorkers call New York “the city”) agreed to run a shorter hours trial in select government offices.

That trial ran from 2015 to 2018. Sonja Ýr Þorbergsdóttir, the head public sector union confederation BSRB, summarized the results in a 2019 talk (in Icelandic with English subtitles).

Sonja was kind enough to share her slides from that 2019 talk with me; below are highlights from surveys the conducted at several intervals during the experiment. (I’ve added English translations of the terms.)

First, there were declines in overall stress levels, in physical and mental stress, and less work-life conflict. 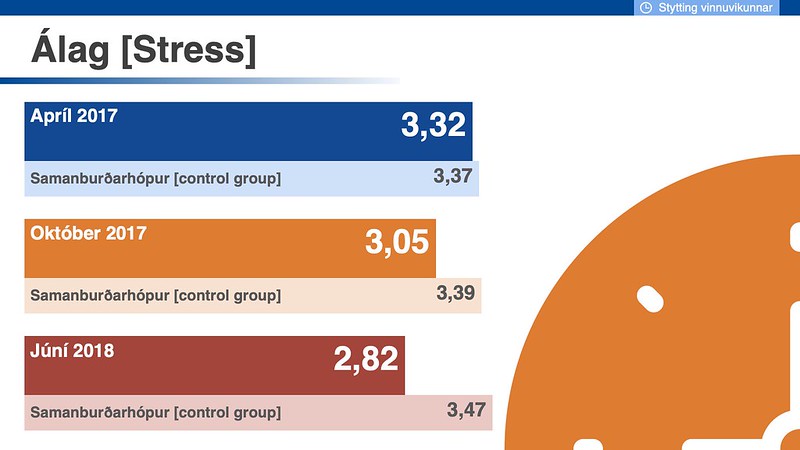 Second, the trial purposely chose some parts of the government (like the revenue service) that were considered especially well-run and already had high levels of job satisfaction. They wanted to see if they could make good places even better.

Drilling down into stress levels a little more, you can see a drop in physical and mental stress: 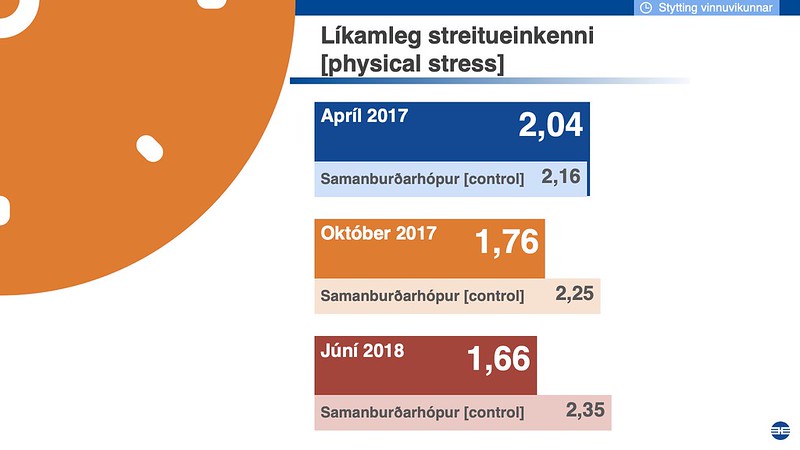 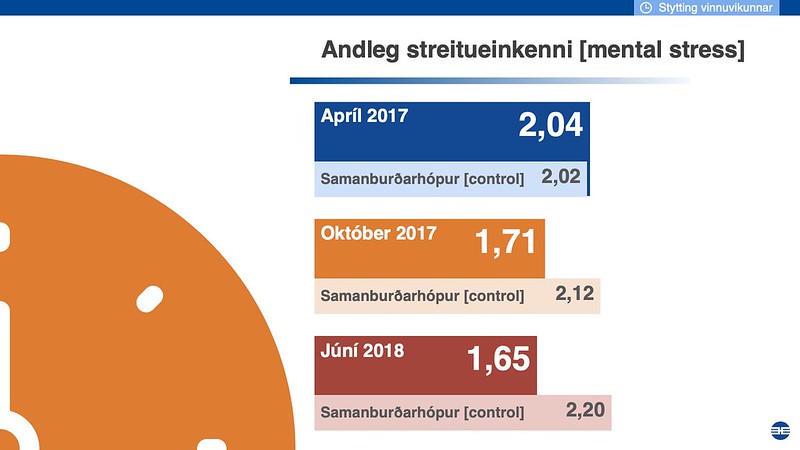 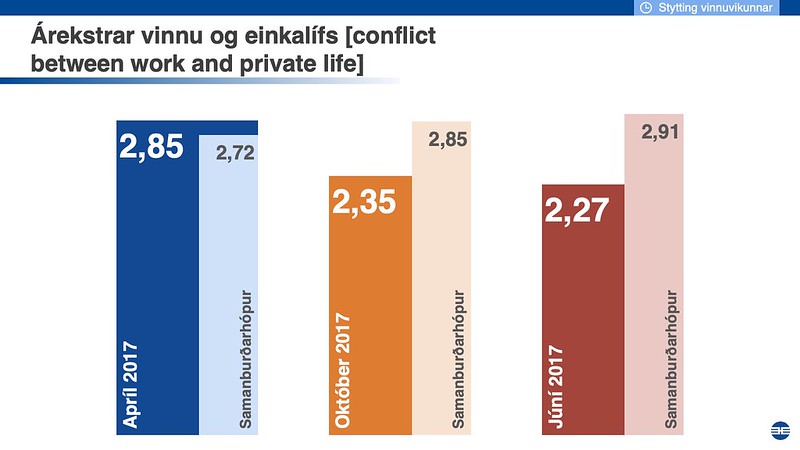 There’s also a decline in burnout. By the way, kulnun, the Icelandic word for burnout, translates as “charring,” which I think is awesome. 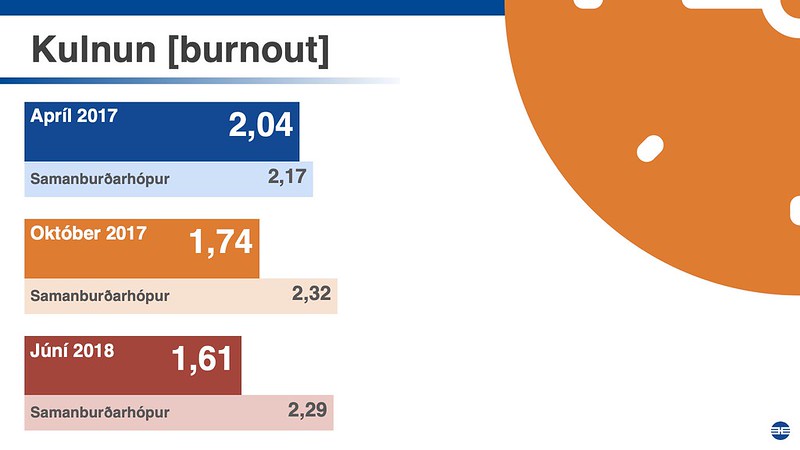 On the other hand, people had better work ethic (or attitudes to the job), work-life balance, greater job satisfaction, and more energy. Also note that at the same time, these indicators all declined slightly for the control group, which makes the improvements even more impressive. 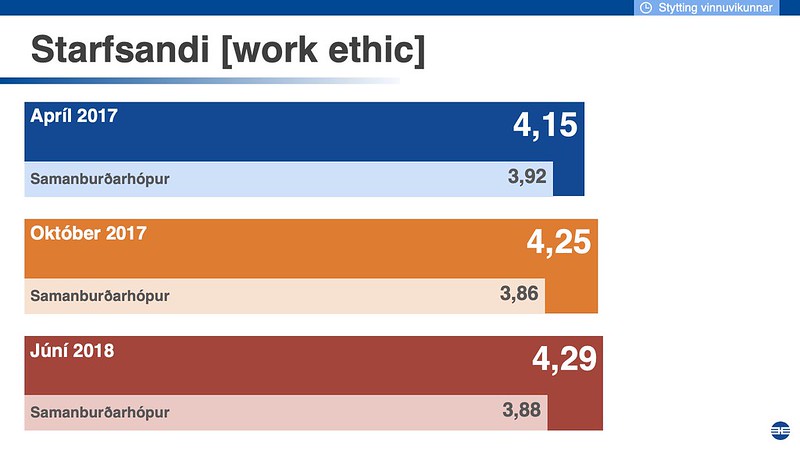 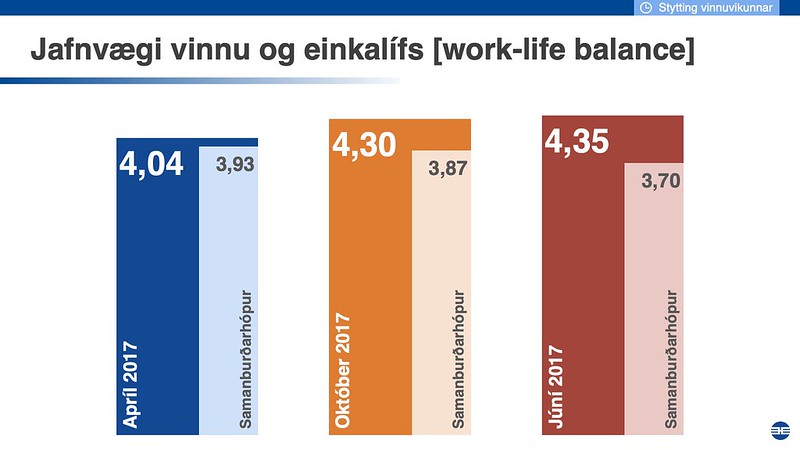 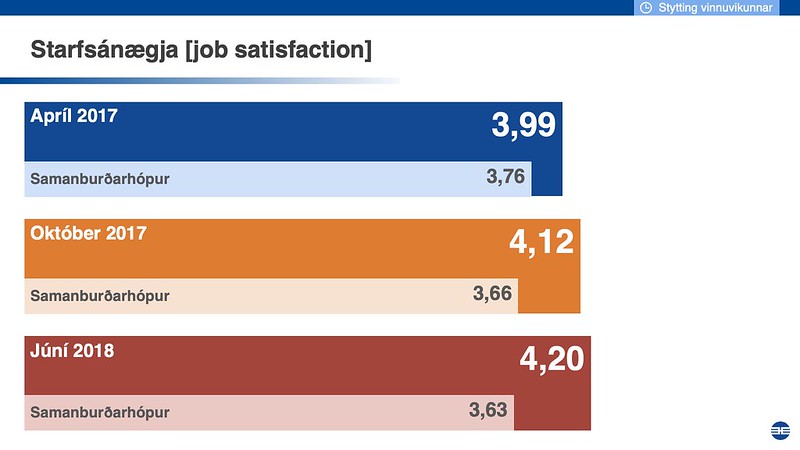 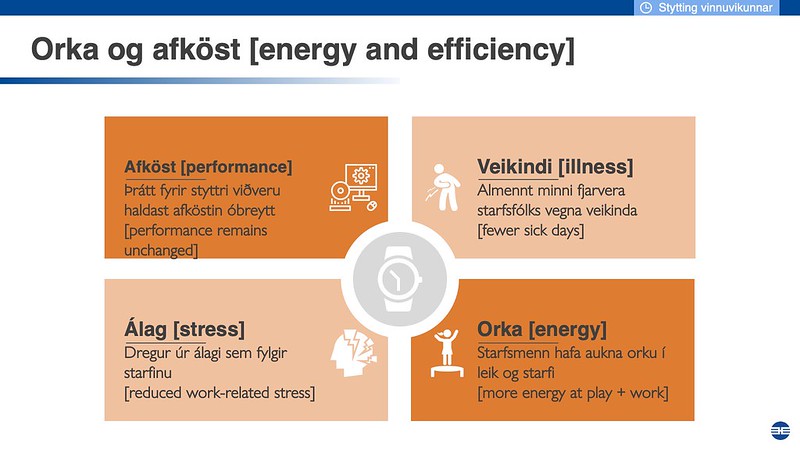 They’ve built on that experience. In early 2020, the biggest public sector union, BSRB, negotiated a contract for government workers that moved all public employees to a 4-day week, in exchange for higher productivity (so no net decrease in services), and some other tradeoffs. They implemented this for office workers this January, and in May started phasing it in for shift workers as well. Shift workers are covered by different contracts, because of rules around night work, overtime, etc., and because they include services and jobs where you might have emergencies and unpredictable, long hours.

The shorter workweek went into effect in January for daytime workers, and in May for shift workers. This means that about 15% of the Icelandic workforce is now working a 4-day week, or some equivalent reduction in working hours. Office workers, police, nurses, nursing home attendants, customs agents— all of them. The private sector union has won a concession for voluntary reductions, but so far they’ve not resulted in much in the way of systematic change.

A couple observations about the transition, based on my interviews.

First, BSRB sees this as both part of a long historical effort by unions to shorten working hours, and a continuation of efforts to improve gender equity in the workplace. The smaller-scale city experiments of a few years ago were consciously designed in order to test the viability of a shorter workweek for everyone. Interestingly, almost all the major figures involved in pushing for the trial, and negotiating the new union contract, were women who had previously worked on policies to help women in the workplace. (In contrast, the public faces of the opposition, including one business figure who called it “economic terrorism,” seem to have been men.) For them, the shorter workweek offers the immediate possibility of improving work-life balance and family; in the long run, it’s likely to boost full-time employment for women in the public sector (a significant proportion of whom are currently part-time), which has a big impact on pensions, retirement, and benefits.

Second, Iceland’s shorter workweek isn’t just a perk for the privileged. I often get questions about whether the shorter workweek is just another benefit for the already-advantaged; but in Iceland it’s explicitly meant to improve the lives of emergency personnel, nurses, and blue-collar workers.

Finally, the process they went through to prepare for the 4-day week was a lot more rigorous than what companies go through. For one thing, when a 10-person company moves to a shorter workweek you can improvise as you go; when you have agreements covering everything from overtime rules to pension contributions, and you have hundreds of people who are working part-time who could potentially become full-time employees, you need to think things through a lot more fully. For another, BSRB wanted to avoid the problems that have come from mandatory, legislated reductions in working hours: Icelandic businesses had trouble adjusting when working hours moved from 44 hours per week to 40 hours, and they didn’t want a repeat of that. So it underlines how important it is to plan, conduct trials, and involve everyone in the process.

So if you really want to get a jump on the future, and understand how the shorter workweek can be implemented at scale, don’t focus so much on Microsoft’s month-long trial, or what they’re talking about doing in Valencia, and look more at what they’re already doing in Iceland.