“We see the time not too far distant when we can have a four-day week and family life will be even more fully enjoyed by every American:” Richard Nixon on the 4-day week

Some time ago I posted about a speech that Richard Nixon gave in 1956 mentioning the 4-day week. This morning, the Nixon library sent me a PDF of the entire speech, and I can now put some context around the quote.

Nixon talks in the speech about four economic goals for the administration: the elimination of economic discrimination, particularly improving the fortunes of “so-called minority groups in the country;” “wipe out bitterness and class struggle;” harness innovation to “promote a new way of life;” and finally, “show the entire world the value of the philosophy that has led to our prosperity.”

Our third goal is to promote a new way of life in the United States– better than we have ever had before. We will do this by unleasing the research facilities of our scientists and technicians so that new forms of production will evolve. Back-breaking toil and mind-wearying tension will be left to machines and electronic devices. We want man’s work to be pleasant so that he can go home each day with abundant energy for enjoying the comfort and friendliness of his family. We see the time not too far distant when we can have a four-day week and family life will be even more fully enjoyed by every American. 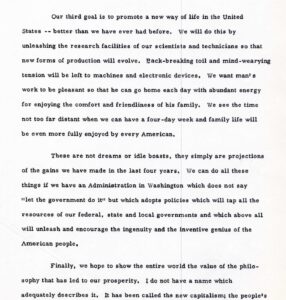 Thanks very much to the Nixon Library for sending me a copy of the speech!

Update: The Nixon speech has gotten some mention in articles about the 4-day week— this New York Times Dealbook piece, this Forbes editorial— and I think I deserve some of the blame for that. At least we don’t have to reach back to Keynes and Russell quite so often!