What “How people ignored each other before smartphones” gets wrong

This has been making the rounds on Twitter recently: 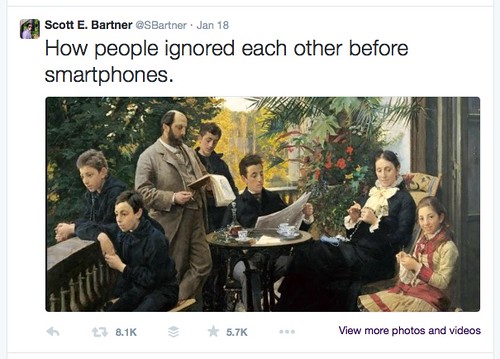 See? People were ignoring each other with paper, and newspapers, and knitting! So why are you whiners complaining about smartphones? Families have been ignoring each other forever. (The “we’ve been dealing with new technologies forever” idea is one I talk about in my book.)

Well, I’m not so sure. Of course, arguing with something like this runs the risk of sounding pedantic and boring (it’s just a painting with a funny caption! can’t you take a joke?).

But taking what’s meant to be a lighthearted (or only slightly barbed) meme seriously, and asking what’s going on in the painting, who these people are, and what it means to ignore someone, turns out to be an interesting and revealing little exercise.

First off, about the painting itself, and who’s in it.

The painting is The Hirschsprung Family, painted by Danish artist Peder Severin Krøyer in 1881. Heinrich Hirschsprung, the man in the light colored suit, was a prosperous tobacco manufacturer (Hirschsprung cigars were around for decades), heir to the company founded by his father. He had long been a patron of Krøyer’s, buying some of this earliest painting.

Krøyer, the artist, was one of the leading Danish artists of his era, a founder of the Skagen School of Danish Impressionists. Hirschsprung eventually became such an enthusiastic collector, the family had to buy a bigger house for all the paintings; in the early 1900s, the Hirschsprung Collection was given to the state. So that’s why the painting exists.

Where is it? Probably the terrace of the family summer house, in the town of Skodsborg, north of Copenhagen in Sjaelland.

Of course, the scene is somewhat posed, but we can assume that it’s not too artificial; this sort of group portrait was meant to show its members at ease, in characteristic settings and activities. The two boys on the left (Ivar and Aage) are both somewhat idly watching something in the distance; whatever it is has captured their mutual interest, though to judge from their casualness, it’s neither very shocking, nor very fast-moving. Heinrich (the patriarch) and Oscar are both looking at a sketchbook; Anna Schram Vejlby, a curator at the Hirschsprung Collection, tells me (via a comment on an earlier version of this post) that

the sketch book is actually P.S. Krøyer’s and it contains the preliminary sketches for the portraits of each member of the family. So Heinrich is looking at what is going to be the painting he is in:)

–which is a wonderful detail. Vejlby adds, “And the sketch book still belongs to the family!”

On the far right, mother Pauline is looking at daughter Ellen, who looks at the painter (and indirectly viewer). Both are knitting, or sewing.

The only person who can be said to be doing his own thing is Robert: he’s seated in the center, reading the newspaper.

So here’s the first thing is see: the family is all assembled, and while they’re not all interacting as one big group, they’re not ignoring each other either. You have three pairs doing things together, and one person on their own.

This kind of arrangement is pretty characteristic of late 19th century paintings. Consider, for example, Renoir’s The Boating Party:

Again, you have several different clusters of people talking and sitting together, plus a couple people enjoying the view, or talking to their dog (the woman on the far left).

Or, another example of leisure time from about the same period, Millais’s 1859 Spring (Apple Blossoms):

Again, you have a couple clusters of people doing things together, and other people off in their own worlds. In particular, the woman in the golden dress on the far right, looking at the viewer as she is observed by another figure in the painting, echoes to Ellen-Pauline interaction in The Hirschsprung Family.

Granted this is a small sample size, but these paintings stand for thousands of group portraits, dinner scenes, outings, cafe scenes, boating trips, etc. that one could dredge up. Basically, unless you have a board game or a meeting agenda, the interaction that the Hirschsprungs are demonstrating is pretty much what large groups of people do: they devolve into pairs or triads, with the occasional person just doing their own thing.

(One more copy of the painting, just to refresh your memory.)

The other question one might ask is, how much interaction would such a group have had? Would their contemporaries have seen a family that doesn’t like each other, an extra-bubbly group (these are Danes we’re talking about, after all), or a normal family?

Why is this important? Because it illuminates an important issue: what it means to ignore someone.

When you’re in a classroom or a meeting, for example, you’re normally supposed to listen to the person talking. To not do so, consciously (by opening the newspaper or checking your email) or not (by woolgathering, letting your attention drift, or staring out the window), is to ignore them. In other words, there’s an expectation that you’re going to give that person your attention, and you fail to meet it.

For example, the boy on the right in Norman Rockwell’s Russian Schoolroom is ignoring Lenin:

Likewise, the girl on the right in Normal Rockwell Visits a Country School is also ignoring her teacher, and the rest of the class:

In contrast, there are situations in which you’re not expected to give someone your attention: at the movies, on the subway, in the library, while you’re driving. In these cases, your attention is supposed to be focused on something else, and it may even be a little rude to engage with other people, or to stare or listen to them (if they’re on the phone, for example).

In short, ignoring someone is an act; it’s not just a state. To say you’re ignoring someone carries implications that you’re doing so willfully, perhaps with the knowledge that you should be paying attention to them.

So are the members of the Hirschsprung family ignoring each other? I think not.

The three cups and saucers on the table, and the bottle and small cordial glass, suggest that it’s late afternoon. It may be that the family is back together for the first time since morning: Dad is back from work, the oldest could be just back from the office or university, others have been at school, or shopping, or sailing. Everyone’s back, and this is time to have a drink and unwind before dinner.

Such a gathering would have demanded good behavior and politeness, but you wouldn’t necessarily be expected to be convivial: it’s sociable, but among people who are familiar with one another, there’s not a lot of pressure to be social.

Indeed, it would have been more pleasant if you didn’t have the expectation that you’re going to be chatty imposed on you. Everyone is together— that probably matters—but you can just hang.

Further, in the late 19th century, many bourgeois kids spent more time with governesses and tutors and teachers than with parents, and so Heinrich and Pauline might not have been expected— even by the kids themselves— to be super-interactive.

So there’s not a lot of reason to believe that this is a scene in which people are ignoring each other; that the technologies of newspaper, sketchbook and sewing needles are distracting people; or that, were those technologies not available, they would have been doing anything differently.

So… No. This isn’t how people ignored each other before smartphones.

I think the other thing worth point out about this scene is that none of the things that are claiming the attention of the people in the painting— the sewing, the paper, the catalog or sketchbook, and whatever Ivar and Aage are watching— hold their attention very firmly.

None of the technologies they’re using are they designed to be a distraction.

Nor do they struggle if you start to turn them off.

They don’t ask to make sure you want to navigate away from the page, or warn you that quitting now will result in changes going unsaved; none of them force you to confront the feeling (as Drawsome does) that exiting the game also means abandoning your friends.

That’s a difference worth pointing out.